This is the lovely way the Show was described back in the 1950s in a book ‘The Yorkshire Dales’ by Marie Hartley & Joan Ingleby.

We believe this is still as relevant today as it was then and reflects the ethos of the Malham Show Committee and how we would like the Show to continue.

Malhamdale Show has its origins in a meeting held at Airton on 22nd May 1907. The proceedings are briefly recorded in the minute book held in the Craven Museum, Skipton, and reads:

“It was agreed that the inhabitants of Kirkby Malhamdale do arrange to hold a Show and Gala and that the association for the purpose be formed. Mr. T. Edmondson proposed and Mr. Beck seconded the proposal that Mr. D. Carradice be Secretary of the association – carried. A second meeting was held on 28th May 1907 when It was agreed that a committee be formed consisting of all members who subscribe half a crown to the funds of the Association.” 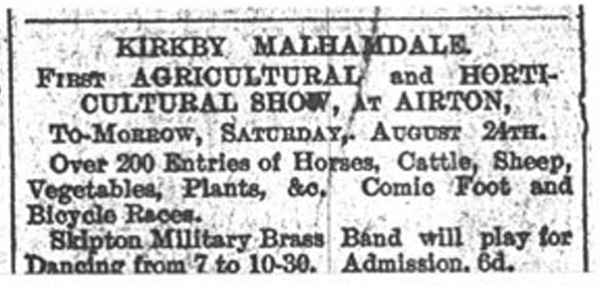 The first show was held on Saturday August 24th 1907 at Airton in “the croft against Mr Simpson’s”. Sports included races for boys and girls attending parish schools, water carrying in glasses for girls, a bun eating competition for boys, a duck race, a wheelbarrow race where the competitors were blindfolded, a slow bicycle race, sack races and a married ladies’ race.

The shows continued each year at Airton until the outbreak of the First World War, 1921 & 1922 saw the Show resume but then there is no record of anymore shows or sports days in Malhamdale until after the Second World War. 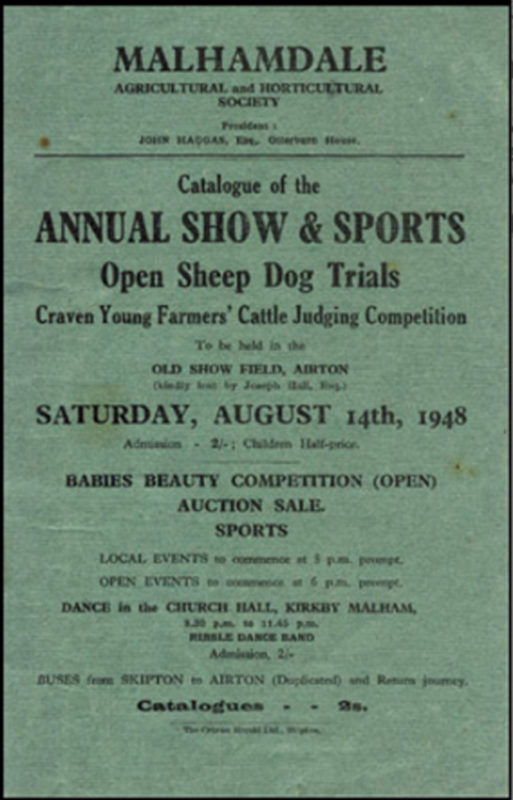 Malhamdale Show as we know it today restarted when the Horticultural Committee met at 7 pm on Wednesday 17th April 1946 in Scosthrop School. The committee felt that the Show should also have an agricultural section and the secretary was asked to write to representatives from Otterburn, Calton, Scosthrop, Airton, Kirkby Malham, Hanlith, and Malham and invite them to serve on the committee.

The show was to be held in Mr Joseph Hall’s field at Airton and it was decided to call the show “Malhamdale Show and Sports”. A further five meetings were held before the show took place on Saturday 24th August 1946.

Each year the Committee tried to introduce new activities or classes to keep the show interesting. Babies’ beauty was popular for many years but more recently has dwindled in interest and is not part of the programme now; Robin Hargreaves shared his reflection of his own participation recently on twitter as part of #ShareaStoryinOneTweet

“When I was 6 months old in 1962 my mum entered me into the babies’ beauty contest at Malhamdale Show. As she approached the ring where the judging was about to take place she assessed the opposition and withdrew me.”- Robin Hargreaves 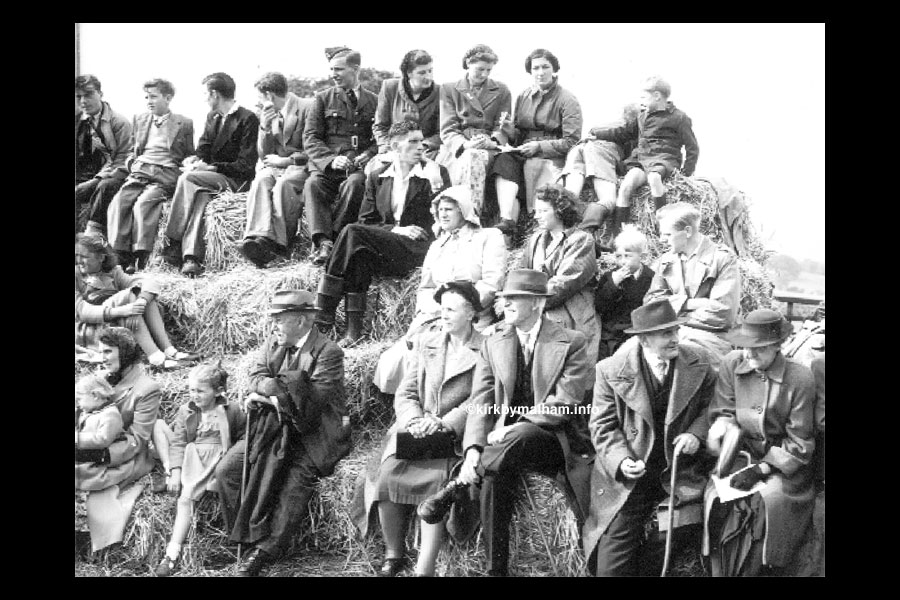 Three ladies on the right in the back row are Nancy and Annis Utley with Daisy Wilkinson, later Mrs Daisy Harrison at the end of the row. On their left, in uniform is Eric Lawson and in front of him in a white open necked shirt is John Lawson. Peter Sharp is third from the left on the back row.

The gentleman in the middle row on the right is Walter Heselden. At the left hand end of the front row is Mrs Beckwith with Margaret and Rosamund. Mr And Mrs Carr of Lee Gate are in the middle and at the right hand end are “Uncle Dot and Auntie Madge” Bolland. 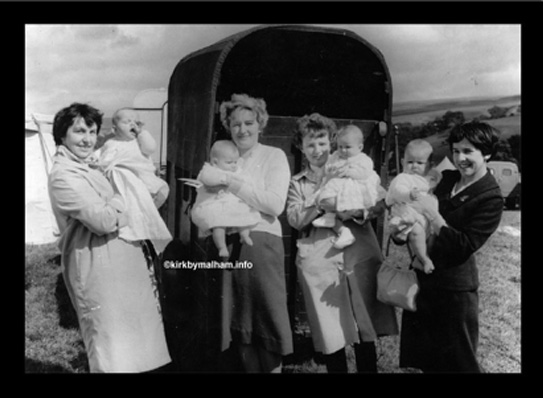 On the left, Annie Heseltine with Karen and Jeanne Sharp with Annabel. Mary Scothern with Michael is on the right. 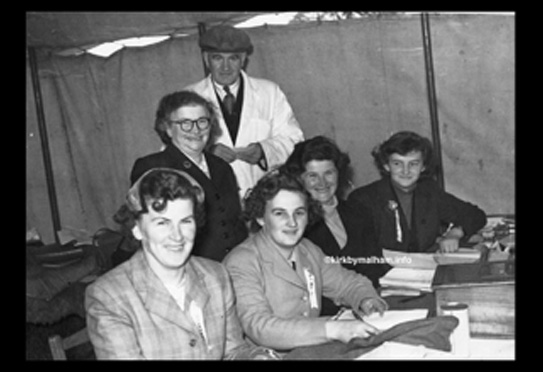 Mr Rob Taylor, Show Secretary from 1946 to 1968 when he became President, in the secretary’s tent with his wife and daughters Ethel, Jean, May and Eileen. 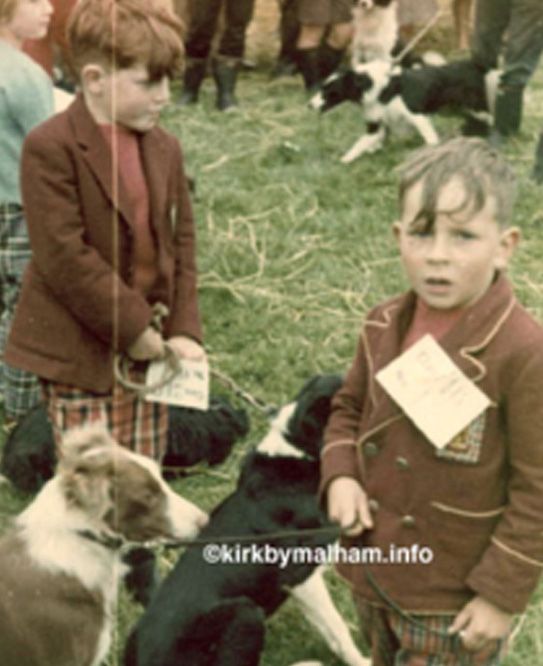 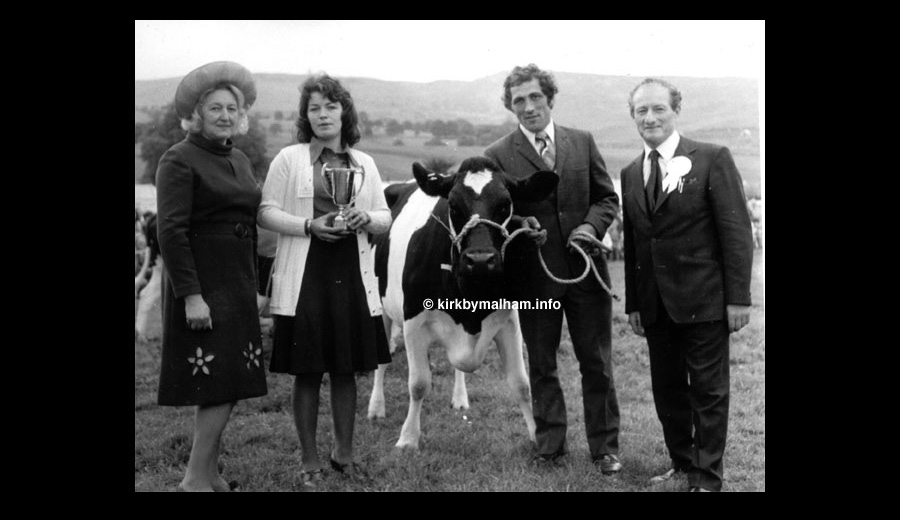 The Show moves from Airton to Malham

The sixties brought a new Show setting – in fact described as ‘A delightful new setting’. In 1960 the Show moved from Mr WJ. Hall’s field in Airton to its present site in Malham to a field then owned by Mr W Sharp. The Show continued to grow in popularity but retained and consolidated on the traditional events for which it had become well known.

This decade also saw Malham Show have its First Lady President in 1965 – Mrs Vera Fell of Otterburn. It would be over 20 years before the next female President. 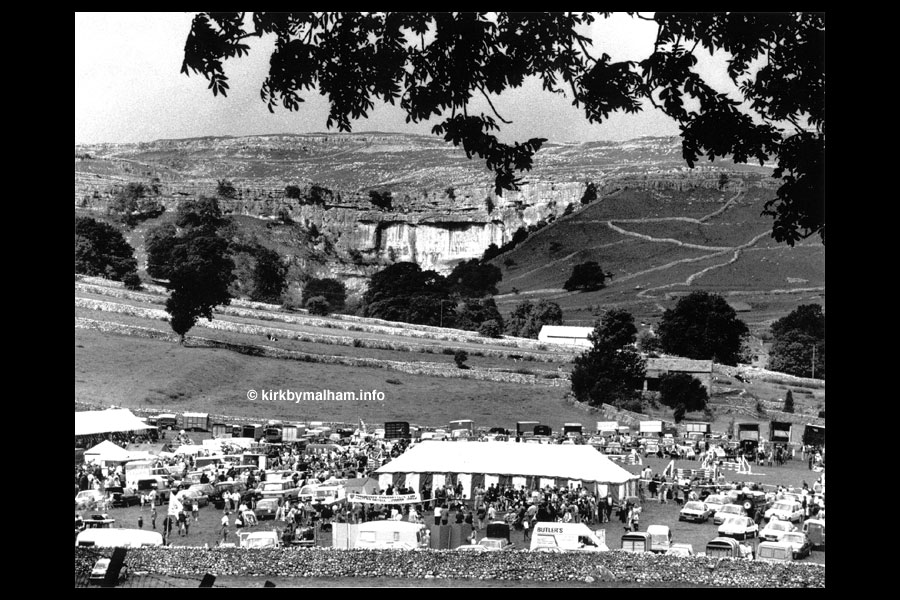 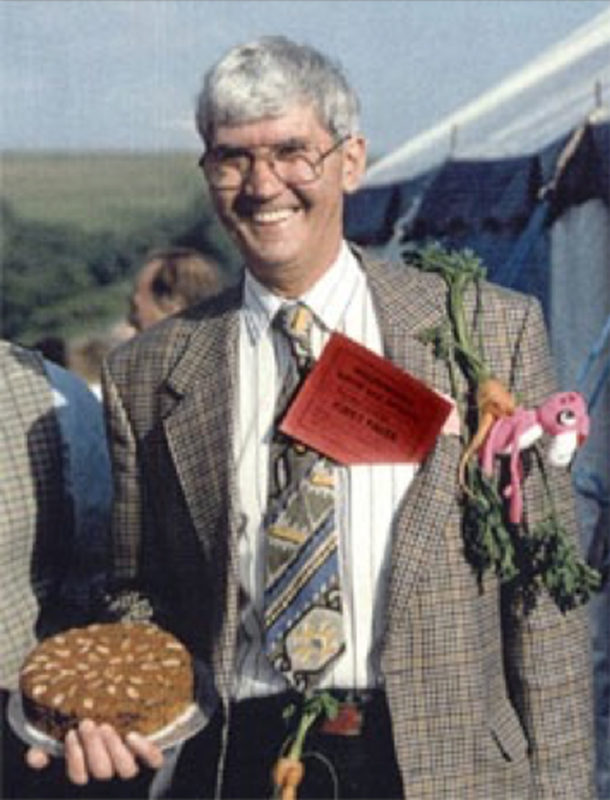 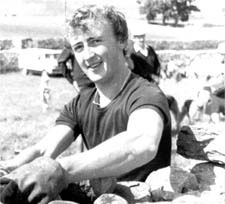 This was done by an auction sale of exhibited and donated livestock and produce which raised £850, a barn dance at Hurries Farm, Otterburn, a whist drive and raffle, a coffee morning in Malham Village Hall and a letter sent to all households in Malhamdale requesting support for the purchase. By the time of the AGM in January 1978 the Showfield had been bought and paid for.

Over the years the weather and especially the rain has been a feature of many of the Shows, but we persevere regardless.

In 1985, for example, President, Mr Eric Hargreaves, commented it would take more than “a bit of rain and muck” to put Malham Show off. (However Betty, his wife, was unable to wear her specially tailored show outfit!).

During the next couple of decades farming went through difficult times and the Show has had to diversify. The character of the Show in the nineties reflected the gradual decline in dairy farming in the dale with fewer classes and entries in the cattle sections while sheep entries increased with more classes for Swaledales and new classes for Blue Faced Leicesters and Mules which had become the dominant breeds. In 2001 the Show was cancelled due to Foot & Mouth.

More recently rare & native breeds of cattle and sheep have started a comeback.

The Show continues to develop each year, trying to stay relevant in the 21st Century and trying to maintain some of the traditions which have brought the Show success. In essence trying to keep the values which formed that original description